The Similan Islands are a group of eleven islands in the Andaman Sea off the coast of south Thailand and north of Phuket Island. The islands are 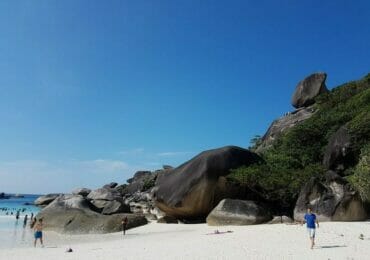 The largest island is Ko Similan, the surrounding sea depth is 60 feet and there are rock formations, coral reefs that are claimed to be shaped resembling living animals and vegetation such as deer and mushrooms and popular with scuba divers, experienced and novices.

Ko Huyong is breeding grown for turtles who come to lay and hatch their eggs. The beach is the longest and widest of the Similan Islands but tourists are not allowed to visit the island so as to preserve turtle numbers.

Diving is popular around the Similan Islands with spectacular coral reefs, rock formations and wildlife around large granite boulders. There are numerous sites where divers can swim through rock formations and discover mazes of delights in almost underwater gardens that are breath taking and rarely found anywhere else in the world.

Sites worth visiting to dive are Elephant Head Rock, Boulder City, Deep Six, North Point and there are some amazing pinnacles of Ko Tachai and Ko Bon that must not be missed.

The Thai authorities have a conflicted attitude towards tourists trying to balance the needs of the economy and recognizing the contribution that tourists make to the Gross Domestic Product (GDP) and the impact on the environment. Fantasy Reef has been closed to tourists and diving since 1999, although divers blame the local fishing industry and fishing has also been banned in the area. However, the Similan Islands still have a lot to offer divers amongst this group of small islands.

Ko Payan is owned by a Thai Princess, so go there by invite only. Ko Tachai is closed to tourists in order to preserve the habitation and prevent further deterioration.

The best way to visit the islands is by boat, a standard boat trip will take 3 hours each way and 70 minutes by speedboat.